Virtual worlds have always existed: shamans and spiritual healers all over the world say that the spirits were familiar with virtual realities long before they became part of everyday life for humanity through digital media. Is that network still accessible in a world determined by digital capitalism? The subject has become the object of a virtual capitalist order of things and thoughts that accelerates itself. In an endless loop, capitalism and science, complementing one another, espouse each individual’s desire for possessions. How can a counter-narrative be created that is based on cohesion? An evening on the relationship between mythologies, language, and code and the ways colonially coded systems can be hacked or repaired.

Curated and moderated by Kader Attia

At the heart of current technological transformations lie myth, iconography, and new modes of writing. Cyberspace has opened a portal into rare and ancient texts and searchable medieval lexicons (digital humanities); but it has also unleashed mythical creatures from pre-Islamic Arabia to battle against or alongside online trolls. In all these cases, modes of interpellation and acts of reading and viewing have generated unparalleled anxieties and fears of losing oneself in the text or the screen, and of losing one’s life or freedom. In this light, this talk examines the virtual as a space of information proliferation and of portals that collapse both modern episteme and space/time binaries, forcing new configurations of the past and the future on the one hand, and of the real and the fictional on the other. Tarek El-Ariss considers mythical creatures such as demons and ghouls, exploring them as processes of perverse fascination that characterize contemporary viewing and reading practices online, and as new functions of writing.

Yucef Merhi contextualizes hacking as an instrument of cultural production and philosophical quest. Who is a hacker? Where does the word come from? How can hacking be employed as a dialectical tool to defeat the establishment? Is hacking just about computers or can reality be hacked as well? Is language a technological device that can be reprogrammed to increase awareness? The presentation explores various examples of personal works, demonstrating the impact of tactical media in the development of a path that could eventually lead to the rise of consciousness, as well as political justice.

It is the obsession of our time. Companies, politicians, and scientists swear by it because it promises unlimited economic perspectives and the emergence of a safe, optimized world. We are talking about Artificial Intelligence. It is able to assess reality more reliably than we can, and is therefore predestined to take charge of all human affairs. Ultimately, however, it undermines the legal principles on which our society is based, namely the free exercise of our right to judge and act. Each truth-declaration produced by AI is characterized by an “automated, invisible hand”, which analyzes every little phenomenon of reality in order to readjust it for utilitarian purposes. This is an analysis of Artificial Intelligence, its anatomy, its history, its characteristics, applications, and interests—and a call to a lifestyle that enables the most diverse expectations and goals.

The Afterlife of Colonization #3: Between the Virtual and the Real
Zora Snake (performer, choreographer, and artist)
performance

Zora Snake is a dancer, choreographer, and performer from Cameroon. Trained in hip-hop and traditional dances, he has developed an aesthetic that explores and shifts the limits of these forms, most often taking the street onto the stage. His performances aim at reconciling a body with its dispossessed memory. To the rhythm of Cameroonian heritage dances (Souban, Pallum, Nah major, Pa’mendzong, Medjouong) and hip-hop beats, Snake deconstructs his relationships to works of art, as a means to discover them anew. This is not about recreating a lost ritual. It is an attempt to temporarily suspend history, to better understand its stakes and legacies, and the costs that are still to pay.

Black, black, black! This is the motto of the work in progress created by Ivonne González, a performer and activist against racism and for the rights of migrants. The participatory performance evolves in relation to space, dance, bodies and painting in real time. Music, video, and poetry are combined to create a piece impregnated with the color of ebony. For Ivonne González, blackening the virtual discourse is a necessity, a political and artistic act, that must be expressed without spatial limits, where blackness in all its nuances and forms has been postponed for so long.

Kader Attia: The Medium is the message
Filmscreenings in the Auditorium: 8 pm, 9 pm, 10 pm, 11 pm

from 11.30 pm
Maryisonacid (DJ, African Acid Is The Future)
Maryisonacid is a DJ, promoter, and curator for radio stations such as Worldwide FM and Berlin Community Radio. In 2014 she started her DJ nights in a post-punk bar in Berlin Neukölln, often playing alone from 10 p.m. to 10 a.m. for a very mixed underground crowd, eager for the variety of sounds she presented. In 2015 the party moved to Loftus Hall and has since grown into a well-respected music platform. Her love for music reaches well beyond the club scene, breaking the rules of traditional dance music sets: “From Afro to Techno and everything in between.” 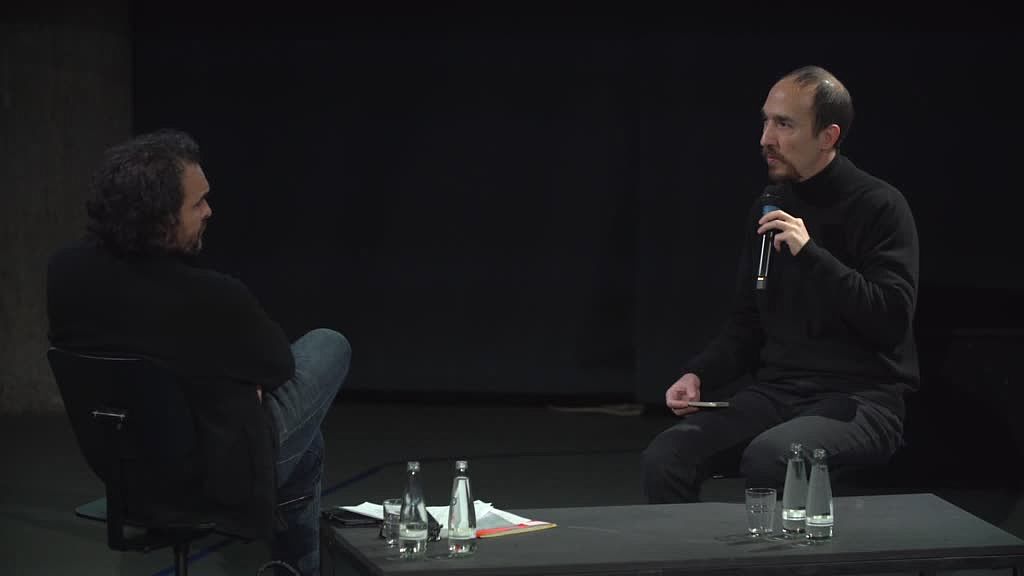 Performance by Zora Snake: The Afterlife of Colonization #3: Between the Virtual and the Real Part of “Countering Virtual Dispossession” English original version Lecture, conversation, Jan 12, 2019 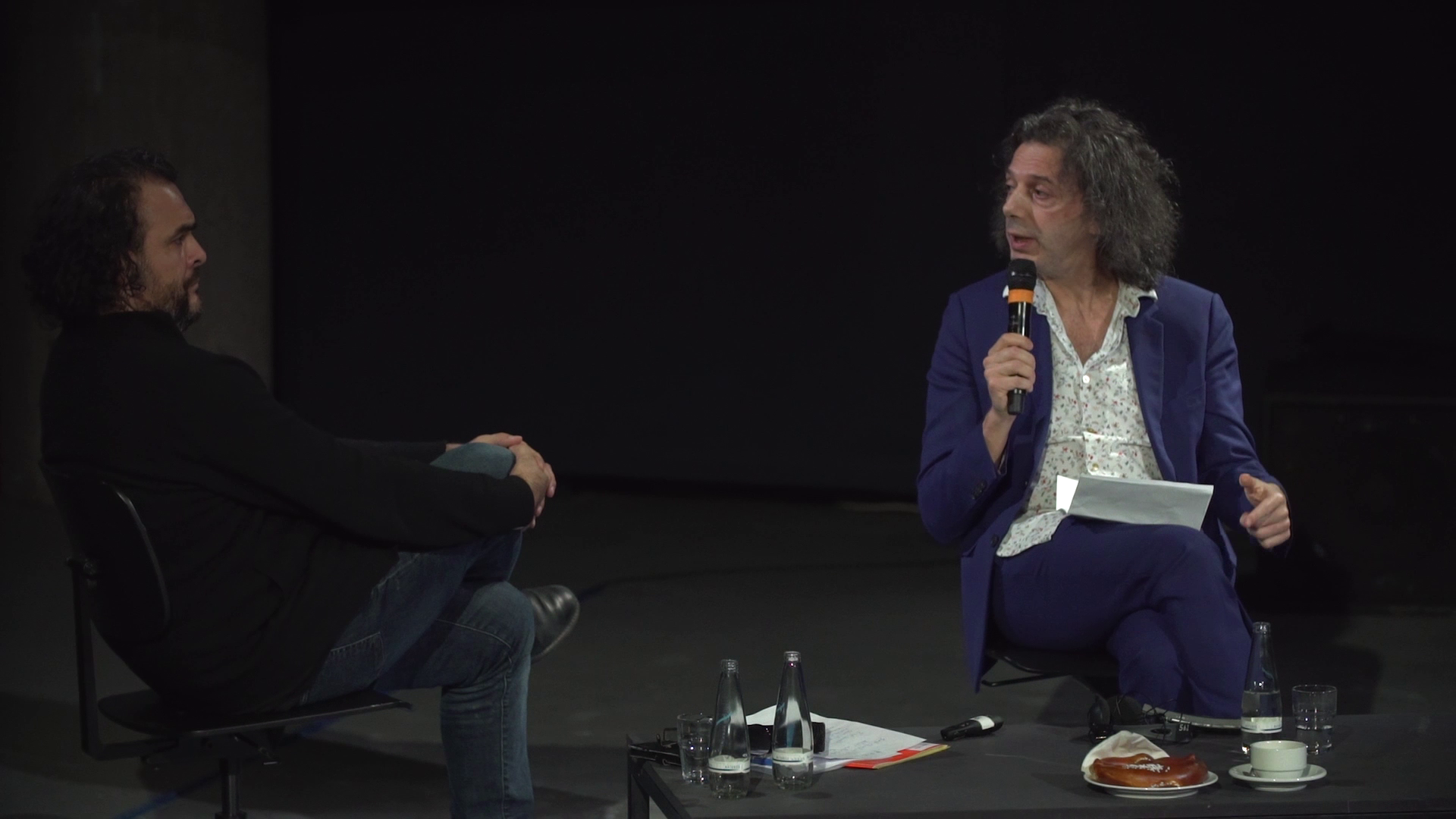 Performance by Zora Snake: The Afterlife of Colonization #3: Between the Virtual and the Real Part of “Countering Virtual Dispossession” English translation Lecture, Jan 12, 2019 Tarek El-Ariss: Genealogies of the Virtual: From Desert Ghouls to Online Trolls

Film installations by Kader Attia, Giulia Bruno & Armin Linke, Filipa César, and Alexander Kluge. A scenography by Raumlabor Berlin, where one can unlearn learning, invite visitors to navigate the infrastructures of new alphabets.