Railway infrastructures have repeatedly played a role in wartime and postwar landscapes acting as a grid for contradictory movements, such as gatherings, connectivity, dispersal, and division. These movements are treated in this session as the unintended evidence of various histories: Indigenous Australian men and women in Australia during the Second World War; forms of life during the Lebanese Civil War in the 1970s and 1980s, Berliners sharing a unified railway network, and recently, in the summer of 2015, of people walking along the railway tracks to escape wars and seeking refuge in Europe.

On September 19, 1943, a group of Karrabing ancestors escaped from a war internment camp and walked over 300 kilometers back to their coastal homelands in Northern Australia. Night Time Go is an exploration of the settler state’s attempt to remove Indigenous people from their lands during the Second World War using truck, train, and rifle and the refusal of the Karrabing ancestors to be detained. The film begins by hewing closely to the actual historical details of this ancestral journey but slowly turns to an alternative history in which the group inspires a general Indigenous insurrection driving out settlers from the Top End of Australia. Mixing drama and humor, history and satire, Night Time Go pushes subaltern history beyond the bounds of settler propriety.

Shahram Khosravi
Along the Rails with Travelers without Papers
Lecture

One paradigmatic image of the world today is of people walking along railway tracks seeking refuge in Europe, escaping death in wars in Syria, Iraq, and Palestine among other places. Using particular tactics to secure their insecure lives, refugees are perceived to disturb the division of the private sphere from the public sphere, turning train stations into bedrooms, platforms into living rooms, and using rail-tracks to mobilize although they’re supposed to remain immobile. The juxtaposition of the undesirable mobility of refugees and the mobility that refugees desire, materialized in railways—whether the infrastructure for cross-border links as a project of European integration, or as part of the colonial dream to link Berlin to the oil fields along the Persian Gulf at the turn of the nineteenth and twentieth centuries—has produced a narrative corresponding to the current global situation that simultaneously stimulates and illegalizes the crossing of borders.

In his 1982 essay, Stadtmitte umsteigen (Change at Stadtmitte), writer and columnist Heinz Knobloch conducts a mnemonic excavation of a closed interchange tunnel between divided Berlin’s Stadtmitte underground railway (U-Bahn) stations. Knobloch leads his readers from the busy U-Bahn station on one side, to its lifeless twin on the other: a so-called “ghost station.” This talk conducts its own mnemonic excavations of Berlin’s past and present ghost stations — from those that indexed the city’s Cold War division and subsequent reunification such as Jannowitzbrücke and Potsdamer Platz to those with interwar histories that continue to haunt the city including the vestiges of the phantom U10 line. These (once) dormant places within wider railway landscapes provide entry points that encourage the exploration of other buried memories that lie latent in the infrastructures beneath Berlin and beyond.

In 1896 the French laid the first tracks for the railway in Lebanon, running between Beirut and Damascus. Today this connection is no longer in use. The film is a personal quest and a record of an expedition along the former stations on the abandoned line, a pretext to connect with the landscape of the country after the end of the Civil War. Memories of the past are based on footage from Lebanese and international films, including Seferberlik; Shanghai Express; Duel in the Sun; and Some Like it Hot. The present is a mix of hectic activity around a busy transport artery cutting straight through Lebanon, and the reality of decaying stations and rails. “Everything was better in the past,” one interviewee says dreamingly. Rania Stephan and her interviewees contribute to this personal reconstruction of the past, each in their own way, reminiscing about the trains that ran along the route. Along the Rails with Travelers without Papers | Shahram Khosravi 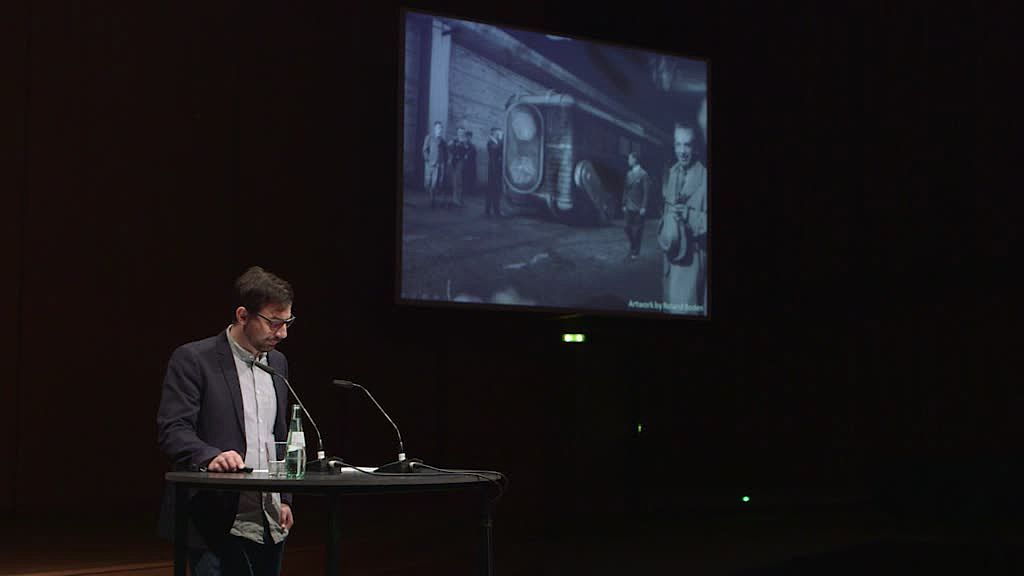 Shahram Khosravi: Along the Rails with Travelers without Papers

Shahram Khosravi: Along the Rails with Travelers without Papers (German)