In radio, two spaces fall into one: the space of recording and the space of reproduction. Thus, on the one hand, the radio is the a-local medium as its voices and noises are constant and ubiquitous. On the other hand, the radio is a medium of orientation: it conjures up the presence of the local with original sounds and serves as a technology for navigation and surveillance. The relationship of the recording space to the space of reproduction is a political one. Who hears what? Who is making something heard? Who or what remains silent? Who is capable of creating new radiophonic spaces?

Lino Camprubí: Finding your Way in the Ocean’s Soundscape
Radiophonic space seems to share a certain set of attributes with the ocean. Both defy concepts of fixed spatial identity, visibility, and stability and thus seem to challenge western ontologies. Paradoxically, radiophonic technologies allow for the measuring of the ocean, navigating in it, and “seeing” into its depths. Yet, radiophonic and acoustic measurements go far beyond mere geography: How are borders drawn at sea? How do submarines orientate themselves in deep waters? How do navies find sunken migrant boats? Lino Camprubí explores sonic technologies and its political, technological, juridical, and economic implications with special regard to the Mediterranean Sea as a radiophonic space.

Marko Peljhan: Star Valley (Icarus)
The electromagnetic spectrum can be understood as a natural resource that can be modulated, monitored, and transformed. Although this resource is inexhaustible, the questions of “who” and “how” have far-reaching political implications. Marko Peljhan will present a manipulated spark-gap transmitter that occupies and overwhelms radio signals. The single spark-gap transmitter is one of the earliest apparatuses for radio transmission. The transmitter, which will be controlled by a computer running a neural network that has been trained on military codenames, describes units, orders of battle or military operations, and their descriptions in order to generate new names, theaters, and directives of “imaginary” operations.
Star Valley (Icarus) was conceived by Marko Peljhan and Matthew Biederman.

Sebastian Kunas: Politics of Hyperspace
Reverberation and echo convey spatial structures acoustically. Yet, since recording and playback techniques are around, reverberation and echo can be detached from their contexts and acoustic spatial structures can be reproduced independently of their material spatial conditions. The sound studio apparatuses, the reverberation and echo machines, the metal bodies, audiotapes, electrical circuits, and algorithms are all capable of producing acoustic spaces that no longer have an equivalent outside the radiophonic constellation. In his contribution, Sebastian Kunas examines these spaces and their protagonists. What narratives lay hidden in the walls of radiophonic hyperspace? What sonic life-forms does it produce?

Emeka Ogboh: I sneak into Lagos in a Yam Truck
How do place and sound relate to each other? What kind of place emerges once sound is isolated from its physical surroundings? Who are the people, and what are the desires that might inhabit such place? The title of Emeka Ogboh’s performance refers to a poem by Akkem Lassisi that addresses the illusions and disillusions that accompany any process of migration. Ogboh will transpose soundscape recordings from Lagos with the Berlin soundscape, thereby creating an acoustic space in which the two places seemingly fall into one. 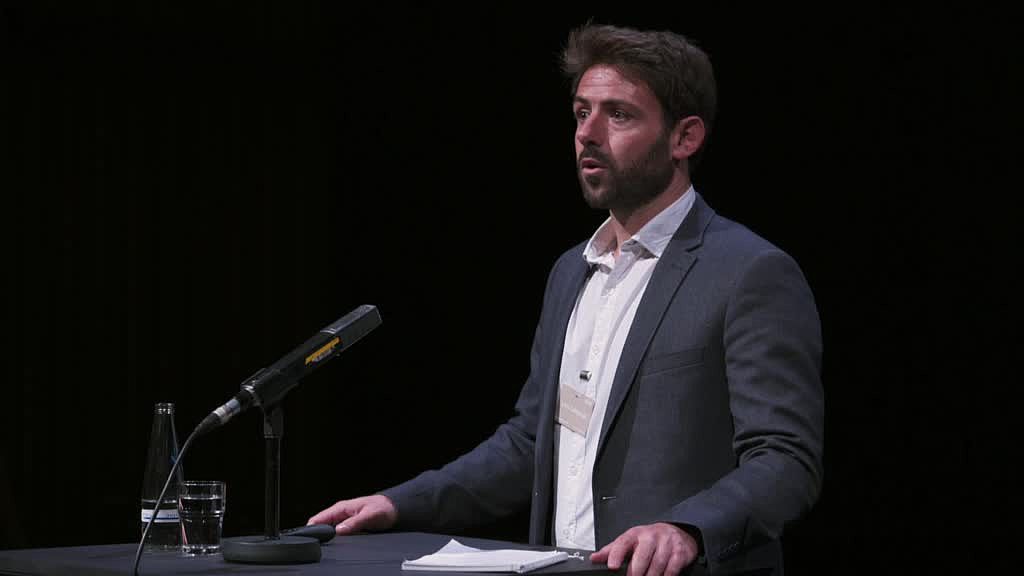 Lino Camprubí: Finding your Way in the Ocean’s Soundscape

Lino Camprubí: Finding your Way in the Ocean’s Soundscape

Lino Camprubí: Finding your Way in the Ocean’s Soundscape (German)

Emeka Ogboh: I sneak into Lagos in a Yam Truck