How do intelligence agencies become power apparatuses with their own agendas? What do major construction sites reveal about today’s society? What significance does the digital space have for democratic processes? And how do economic elites influence world politics? In the four productions Staat 1–4, the writer-director collective Rimini Protokoll sets out to explore fields outside of what can be organized and controlled by the nation-state today. The complete tetralogy can be seen in March 2018 at Haus der Kulturen der Welt and the Neues Museum.

Globalization, digitization, fear of terrorism and public enemies, lobbyism and many other factors interlock in the search for clues by Rimini Protokoll. They are looking for the players in the background, for the areas in the political sphere where state influence is disappearing. Four exemplary themes form the starting points for four theater evenings. The first three parts premiered in Munich, Düsseldorf and Dresden in 2016 and 2017. On January 12, 2018, Staat 4 premiered in Zürich. All four parts of the co-production by HKW with the Münchner Kammerspiele, Düsseldorfer Schauspielhaus, Staatsschauspiel Dresden and Schauspielhaus Zürich will come to Berlin in March of 2018.

Do intel agencies protect the citizens or do citizens need to protect themselves from the state? The international network of secret services can be experienced in an interactive museum visit in Top Secret International (Staat 1). How is the allocation of multi-million-euro infrastructure projects to construction companies influenced and who benefits from it? The theatrical building site tour of Staat 2, Society under Construction, looks at it from eight different viewpoints. Are elections as they are held today up-to-date? Together with the audience, Dreaming Collectives. Tapping Sheep (Staat 3) draws an arc from the lottery in ancient democracies to visions of future technological plebiscites. Davos State of the World (Staat 4) examines the entanglements of political and economic forces that gather each year at the World Economic Forum (WEF) in Davos with the self-declared goal of improving the world. In whose name are they negotiating there and who has access to these meetings?

How are global capital and world politics linked under the smoke screen of attempts to “improve” the world? What role do exclusive meetings of the rich and powe...

For the launch of the program series State 1-4 (2016-2018) from Rimini Protokoll in December 2016, the philosopher Boris Buden asked whether democracy is dead.... 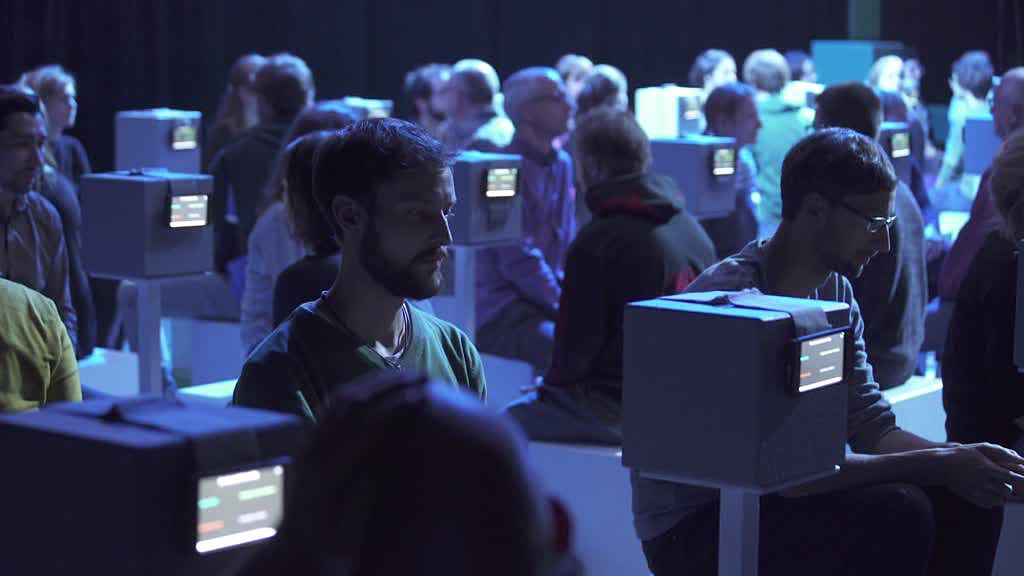 The Program Guide contains texts and images about the four productions, their main characters and contributions by Boris Buden and Bernd Scherer.